Let’s talk a bit about another rare Chinese character.

Since very old days Chinese have been calling jellyfish , ‘mother of water’. This word is documented as early as Tang dynasty in Yiwen Leiju‧藝文類聚, a leishu encyclopedia completed by Ouyang Xun‧歐陽詢 in 624. 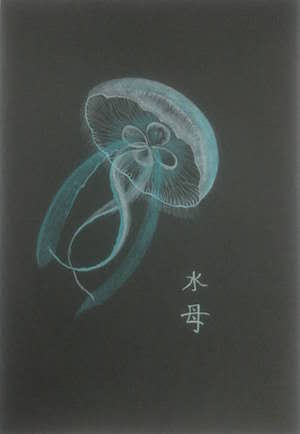 Yet, there is another single character name for jellyfish, .

The character has probably appeared quite early, it occurs in Erya, albeit without explanation, and also in Guangyun where it is described as meaning ‘jellyfish’.

It could probably be a cognate of 蜇, as there’s some similarity not only between the modern Mandarin readings zhà and zhé, but also between Teochew readings tẹ and diēk.

Speaking of which, Min languages are probably the ones that preserved the character 䖳 for us, as Zhu Jingying‧朱景英, a Qing official who spent three years in Taiwan during the reign of Emperor Qianlong, records in his “Notes on the lands to the East of the Sea”‧《海東札記》: 按水母，閩人謂之䖳 As for jellyfish, Min people call it tẹ.

Again, it’s a bit sad that such a nice and old character did not find any extensive use in modern times.